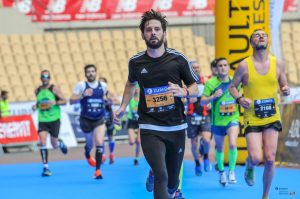 Robbie Kings is running three marathons to raise funds for Magic Me’s Cocktails In Care Homes project. He has just completed the Seville marathon and will be running in Paris on 8th April and in London on 22nd April, we caught up with Robbie to ask him a few questions about this wonderful fundraising effort:

What made you decide to run for Magic Me?
Magic Me is a wonderful charity and it was important to me that any fundraising went directly to the people that need it. My grandfather died two years ago and my Nan now lives alone, so I understand the importance of bringing elderly people together in social situations. More broadly, I firmly believe that life is all about our connections with other people and the positive impact we can have on each other’s lives.

How long have you been running marathons?
6 years. I started out barely being able to run a mile and worked my way up to my first marathon when I was 29 in Amsterdam. Since then I’ve run Rome, Paris, Stockholm and Seville. Paris and London this year will be my 6th and 7th marathons.

Running three marathons so close together seems like quite a challenge? Have you done this before?
I did two fairly close together last year so I thought I’d go one further! There’s only a two week gap between Paris and London which is a bit scary!

What’s your favourite cocktail?
A caipirinha! After a month in Brazil I became very good at making (and drinking) them!

Where are you from?
Plymouth originally. I moved to London 5 years ago.

What do you do for a living?
I look after the marketing for west end and touring theatre shows.

You can help Robbie hit is fundraising target here