Martin Aston has been a freelance journalist and author for the past 30 years. With a particular focus on music and culture, he has been a regular contributor to publications such as MOJO, Q, The Guardian, The Times and BBC Music among others, Martin is perhaps best known to our Magic Me community as our very own ‘DJ Care Home’, creating musical playlists for each monthly party theme. 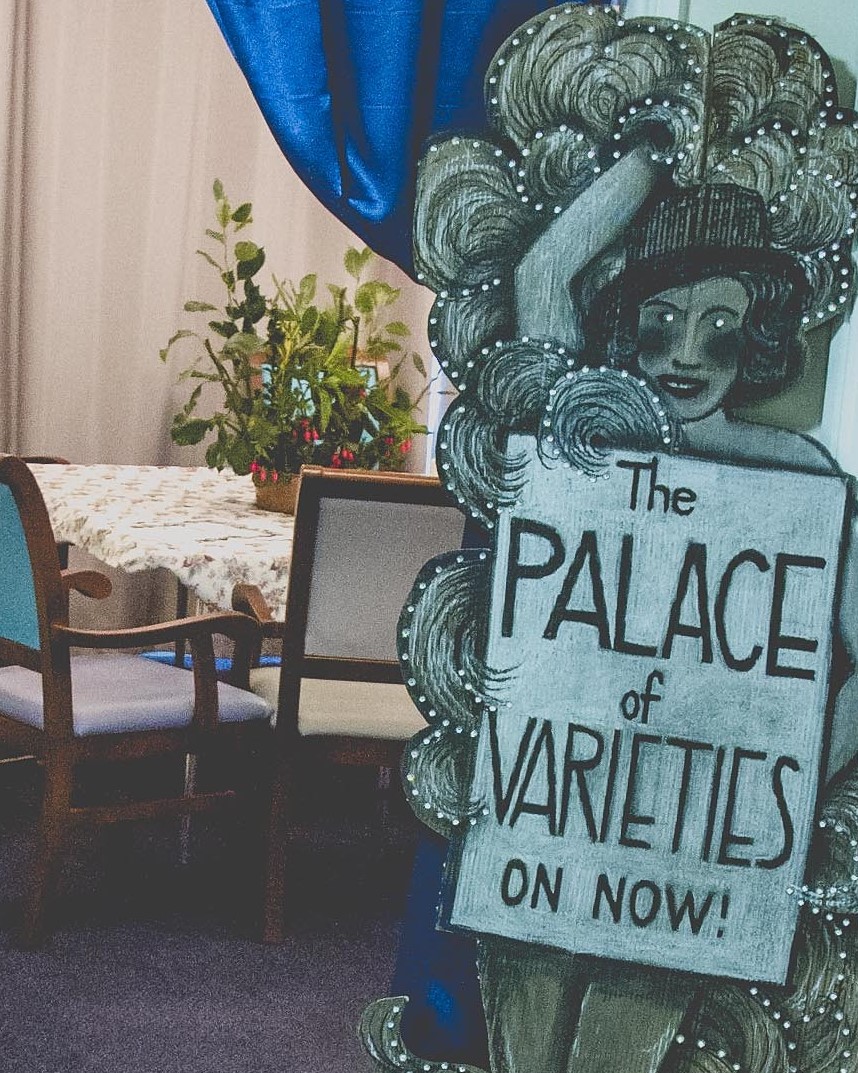 In the Artists Residencies/Palace of Varieties, on one occasion, I played a ska track, keeping in mind that half of the residents had come to Britain from the Caribbean islands – and one resident, who always sat in his wheelchair, his head down and eyes closed, suddenly stood up, and started to jig. I got all tearful!

Martin has eclectic interests across many musical genres. From heavy-hitting pop to outlandish indie figures, he has written features and reviews on everyone from John Cale, Sinead O’Connor and Björk to Abba, Jarvis Cocker and Dolly Parton. He’s even written a piece for The Independent about World Cup songs. His most recent book “Breaking Down the Walls of Heartache: How Music Came Out” (2016) investigates the historical importance of music as an expressive vehicle adopted by LGBT+ communities throughout the 20th century, exploring the diverse social, cultural and political landscapes that moulded them.

Martin has supported several of Magic Me’s projects over the past couple of years, bringing people of all ages and backgrounds together through that magical leveller, music and song. We sat down and had a chat about his time on the project!

We asked Martin a few questions:

Magic Me:    Martin, tell us how / why you first got involved with Cocktails in Care Homes and what motivates you to take part?

Martin:        I know – and love –  the team behind LGBT+ artist co-op / club hosts Duckie. In autumn 2016, I read about their involvement in Magic Me’s Artist Residences in Care Homes project, and theirs was to take place at Waterside care home in Peckham – 10 minutes’ walk from my house. For too long, I hadn’t acted on my wish to volunteering for the elderly, work was always too good an excuse. I asked Duckie if I could help in any capacity, and on the day that I met the team, the person responsible for organising the music had to commit to something else. As a music fanatic, this was clearly fate! Besides choosing– and DJing – the music, which followed each of the ten weeks’ theme (eg the seaside, the fairground, Fireworks Night), I joined each pre-party session, assisting and encouraging the residents to paint, and create, artwork and decorations for each party the following day. The artwork still lines the walls of the room where the parties were held as way of brightening the room, and a permanent reminder of what had been achieved. The project was one of the most profound, and fun, experiences I’ve ever had: to see the difference that music made to people, especially participants living with dementia, and to help create a sense of community and purpose.

Magic Me:    In most of your writing, your exploration of musical form and style is always simultaneously an investigation into the social, cultural and political climate which allowed it to be shaped and developed. The venues, the stories, the communities – the ‘scene.’ For many care home residents growing up in 50s/60s London, a typical Friday night might have meant meeting at a local hall or social club, dancing in groups and with prospective partners to a live band. What do you believe are the main differences in experience of how the younger generation produce, explore, consume and distribute music today, to that of the older participants, and what do you think are the pros and cons of this…?

Martin:         By way of explanation; Duckie’s ‘Artist Residence’ at Waterside was named ‘The Palace of Varieties’ after the theatre on Denmark Hill in Camberwell where a few residents at Waterside recalled spending evenings when they were younger. One major difference between then and now is the fact there were far fewer venues to choose from in the ‘50s and ‘60s, and far fewer places to hear music, live or recorded. Radio was limited, and by no means did everyone own a record player; now, you can carry music everywhere, and with practically unlimited choice, and most TV (including ads) has a soundtrack. So, while today’s club culture has a palpable sense of community, music consumption is now much more an individual experience; everyone chooses their own playlist and listens on headphones, as opposed to the ‘50s/’60s era of hearing music in a social situation – the local hall or social club, or venues such as the Palace of Varieties. And speaking as someone whose grew up in the ‘60s, there was something special about discovering music, because of its relative scarcity. That said, having instant access to music is also special, as otherwise I might never get to hear something because I can’t find it. It also means that I can assemble playlists without having to scour record shops etc – including songs that care home residents want to hear, and to play music without owning a mobile disco!  Every era has its pros and cons.

Magic Me:    Expanding on that point – can you tell us a little bit about the process of curating a playlist for a party where the age range of guests might span 18-108? Many come from different cultures, from India to the East End. What’s important to consider to keep everyone engaged?

Martin:         The process of curating a playlist is down to knowing the most iconic artists and songs from ‘yesteryear’, and also cult favourites, songs that I have discovered through my work (I’ve been a journalist since 1984) and also through my obsessive love of music (I started collecting records from the age of six). I look for tracks as far back as the 1920s – which happens to be the theme of the latest round of Cocktail Parties – from famous blues to music hall songs. To be honest, I don’t consider 18-year-olds when I’m assembling a list! In any case, I’d much rather teenagers discover music that’s beyond their reference points, which belonged more to their grandparents’ world. But different nationalities mean a wide span of musical genres, such as ska and reggae. Greenhive in Peckham, where I volunteer for the monthly Cocktail Parties, and play music using organised playlists but also requests or play some tracks for residents who want to dance – has residents from India and France as well as British and Caribbean, so you’re always thinking of different songs.

Magic Me:    What’s been your favourite Cocktails in Care Homes party theme to create a playlist for and why?

Martin          Playlists that are harder to compile are more satisfying – for example, Fireworks Night, because strangely enough, there aren’t many songs with a fireworks theme! So, you have to be more inventive, or just dig harder. But one particular favourite is the collection of tracks under ‘Dance Party’ because I feel those are the best songs for an upbeat, uptempo mood, with a great combination of melody and rhythm, which seem to get the best response.

Magic Me:    Can you tell us about a particularly memorable moment volunteering on the project?

Martin:         In the Artists Residencies/Palace of Varieties, on one occasion, I played a ska track, keeping in mind that half of the residents had come to Britain from the Caribbean islands – and one resident, who always sat in his wheelchair, his head down and eyes closed, suddenly stood up, and started to jig. I got all tearful! We’d end each week of those parties with a singalong – they were always popular, reading from printed lyrics – with “You’ll Never Walk Alone” and that was a major tearjerker too. Seeing people singing along, and swaying along, to “You’ll Never Walk Alone” at the Royal festival Hall event in December 2017 was also fantastic. The Cocktail Parties are more about conversation, but I like seeing residents dance, and so one of the recent parties at Greenhive, we did just that (it always helps if volunteers and staff encourage the residents to begin with), for the first time since I’ve been volunteering, and that felt like a breakthrough. So, I’d really like to happen every month – I also think singalongs are great too, it creates a different and celebratory mood than a party where you only have conversation – though that of course vital too.

Magic Me:    Inspired by how much your playlists have really transformed the care home environment during our parties, we’re starting to incorporate much more live music within our Cocktails in Care Homes programme, with our upcoming season with Royal Academy of Music students and with plans to work with musicians who are local to each care home. If you could witness any performer / band throughout history play a live set, who would it be and why, and in WHAT venue…?

Martin:         As someone whose second concert was seeing David Bowie, who truly changed my world when I was 14 – and as one of the greatest singers and songwriters I have heard – he’d always be my first choice. But if I had to choose a performer that was still alive, I’d give anything to see Scott Walker live (he never performs) and singing his early solo material – which he admits he no longer feels anything in common with. So, that will NEVER happen! If I had to choose someone alive who loves performing, then Patti Smith is always fantastic – her presence is as intense as her music, and she makes an effort to engage her audience, and create a celebratory, communal atmosphere – and she’ll play old songs as well as new.

Magic Me:    Martin, if you were going to celebrate something in style with a big party what would be your top 10 party tracks?

Martin:         I’ve made a playlist on Spotify – hard to boil it down to ten favourites! But in terms of the music I’ve chosen for Magic Me events, this is my top ten.

Martin is a writer and journalist living and working in London.
You can find out more about his work on his website, http://martinaston.co.uk/