Chuck Blue Lowry is a Magic Me Associate Artist and filmmaker. She specializes in intergenerational and social practice. She works with a number of different groups creating artworks with and about them.

I have discovered that the work I enjoy the most, that has been the most rewarding and enriching to my practice has been with intergenerational groups

In this guest blog for Magic Me Chuck explains how she got involved and talks about her experience and love of intergenerational practice:

I was first introduced to Magic Me as a student at Central Saint Martins. I was in my second year and had embarked on a project with Magic Me artist, Sue Mayo, and the Royal Albert Hall, where a group of older women from a local housing estate joined students to create artworks in the backstage areas of the Hall. I thought it was a pretty cool idea, and wasn’t something I had ever come across before, working with people of different generations. I decided to document it into a short film. This film caught Sue’s eye, and next thing I knew I had been selected to work on a Magic Me women’s project, a movement piece called I Live In It, working with students from Mulberry School for Girls and local women from East London. 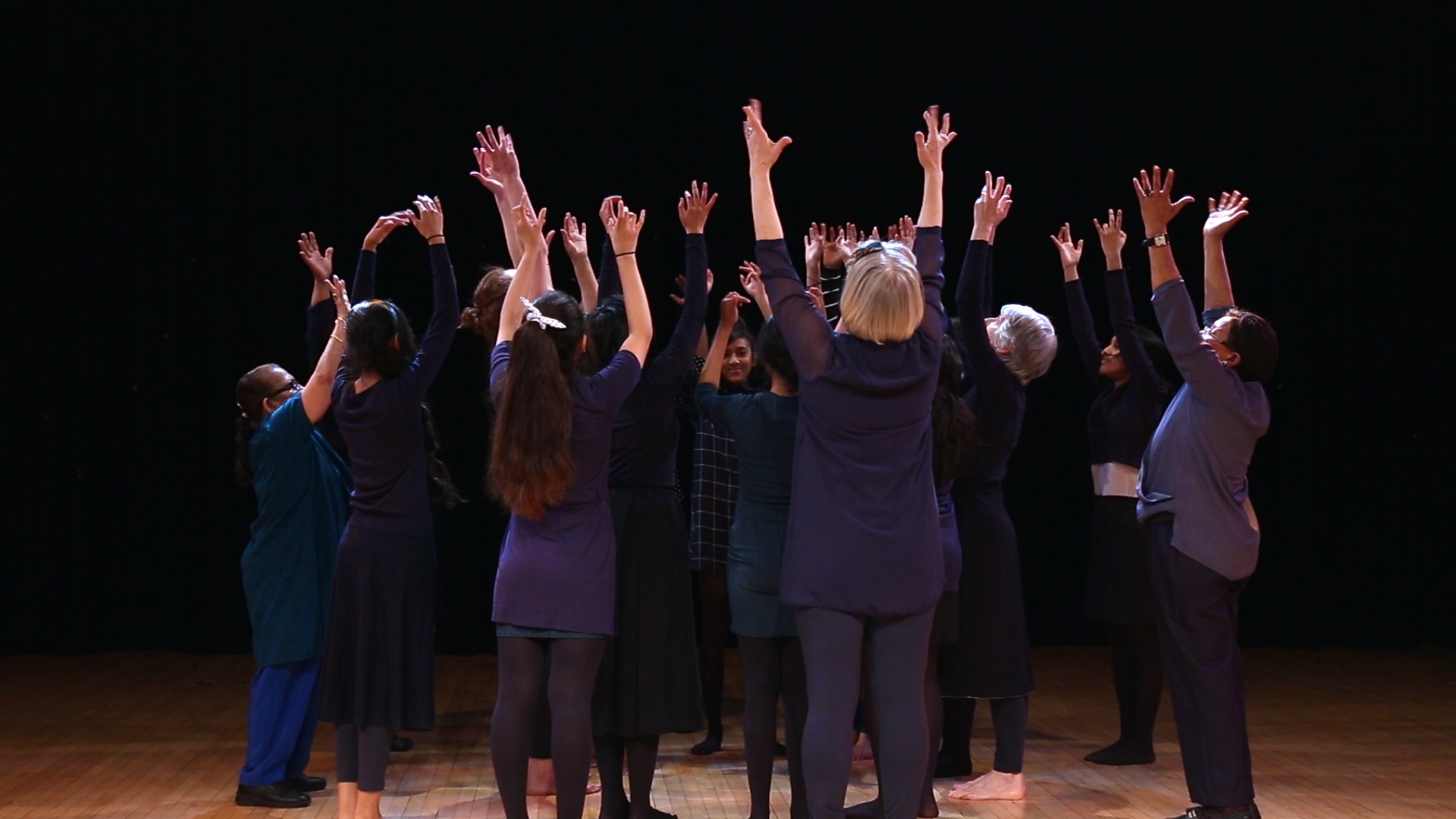 The way Magic Me approaches working with participants of all ages was deeply inspiring and exciting to me as a young artist. The room was full of stories and talents and connections that were fizzing and buzzing between the generations. Everyone was met at the same level and with the same energy, everyone in the room was treated as an artist. The overwhelming feeling I had was that the work was better for having done it together. It had a depth and integrity, learning and urgency to it that can often get lost when you exist within your own echo chamber of peers. It allowed people to have a depth of connection and conversation not ordinarily found in day to day life, particularly across generations.

One of the things I was particularly drawn to in this work, was that it democratizes the arts. For me, the best kind of art is the one that holds up a mirror to society, allowing one to reflect on the world around us and show us ideas, emotions and stories in an innovative and engaging way. Art is a form of communication. I think there is a perception that artworks created by communities, by ‘non artists’, in non-traditional spaces such as schools, care homes, community centres and sheltered housing schemes are somehow ‘lesser than’, lower in quality and usually involve a large degree of finger painting.

However, what I have found is that this type of work can be truly ground-breaking and can open up a whole new perspective. What excites me about intergenerational and social practice, is working with the perceived ‘barriers’, embracing the challenges and really finding the artistry in everyone in the room. It challenges you to celebrate what people can do, rather than focus on what they can’t do, and to be really creative in how you elevate the quality of the work within the limitations of the group. You learn to find beauty in detail. Every action, every word, every movement, sound and thought of the group form a rich tapestry of material to work from. As an artist it challenges you to adapt to your surroundings, to experiment with your own skillset and practice to meet the needs and interests of the group and find a form that they can best express themselves with.

I think that the work created in collaborative intergenerational spaces can be not only accessible and democratizing, but truly innovative, boundary pushing and beautiful.

Since 2016 I have been part of several projects with Magic Me, and each has allowed me to work with an amazing range of participants and artists, each project offering new challenges and successes and benefits to all involved. There are two projects that I’ve selected to focus on in more detail. These have been particularly impactful within the development of my own practice and really solidified my excitement and belief in the potential of this type of work.

Decorum was an intergenerational women’s project that took place across London, Southend and Peterborough. The projects explored the theme of Decorum, the unspoken rules of behaviour for women of the 21st century. Working across different areas with different ages and cultural backgrounds raised some really interesting questions and challenges. Grouping people by age does not guarantee that they will have had similar experiences by any means. This work challenges the silos and echo chambers we tend to move within. Being with people who are different from you can be both challenging and rewarding in equal measure.

An example of this that was really stark to me on this project, was when we worked in Peterborough. Peterborough is a very diverse but also a very divided city and we visited just after the Brexit referendum. Many migrants have settled in the city, but it seemed that there was little integration happening amongst communities. We were working with local students from Iqra School for Girls, a Muslim faith school situated near an industrial park on the outskirts of town, and local women aged 55+, many of whom were recruited from the local WI.

Before every project, we meet the younger and older participants separately for a preparation session, to start thinking about what it may be like working with a different generation. Having worked in London for many years, I was actually quite surprised by the fear that some of the older women expressed about working with this cohort of girls. There was a lot of concern around saying or doing the ‘wrong thing’ in relation to their Muslim faith, and there was a lot of misinformation and chatter about the school in a negative way.

During the project, we spoke as a group about our experiences of ‘decorum’ these unspoken rules of behaviour and when we get it right or wrong. One of girls shared a story of how a man had pulled her headscarf off of her whilst in town, saying that it didn’t belong in ‘this country’.

The group worked together to pool their stories, which they then storyboarded into short scenes which we filmed in a studio over two days.

By the end of the second day, one of the women who had initially been afraid of working with the girls, spoke up and said how embarrassed she was to have felt the way she did, that this experience had really made her think that she needs to question some of the articles and stories she reads about migration and Muslims, and that working with the girls had been such a pleasure, that children were just children. It reminded me why this work is often so valuable, it can break down the fear of ‘the other’. So often prejudice is born of fear, of not knowing, and it goes to show that interacting with, working with those who are different to us have huge societal impacts. Even if just one person leaves a project feeling inspired or changed in some small way by their experience of interacting with others, that has huge knock on affects within their communities.

Likewise, many young people would only have had interactions with family members of a different generation, and yet here they were, creating relationships and artworks with people who are sometimes even a generation older than their great grandparents! The range of experiences and perspectives in these groups are so exciting to be around, the room always feels alive with potential. The impact on the participants, the social and relationship benefits are abundant.

This project was also a great example of how social practice does not diminish quality. The films that we created across London, Southend and Peterborough were all screened and shared at arts venues that champion excellence, including Tate Modern as part of a Flourishing Lives take over, and the Women of the World Festival at the Southbank. Sharing in these spaces really elevates the work and the participants’ experiences, leading them to feel pride in what they have achieved and introducing a wider audience to the benefits and beauty of socially engaged practice.

Quality Street was a project that took place last summer (2019) as part of a two year project funded by housing association L&Q. I worked with two groups during this time, creating pieces that responded to the theme of ‘carnival’. We worked with two housing schemes, and a local primary school in Leyton. The groups’ ages spanned from 7-100(!), proving to be one of the most diverse groups I had encountered yet. There were many considerations to take, particularly as many of the adults we were working with had very high support needs, some finding moving from one chair to another to be a real challenge, which is quite a different energy level to that of our cohort of 7 and 8 year olds who would often appear to bounce into a room.

I had originally planned on creating a film project with the group, exploring their relationship to the local area. However, on meeting many of the residents, it appeared that many had only recently moved to Leyton and so they hardly knew the area at all, and many found it hard to get out and explore their surroundings. Likewise many of the young people had limited knowledge of the area beyond their school and homes.

Therefore, the plan needed adapting, and so we started to think about the types of celebrations we connected to as a group. This was a great way of opening up conversations about our commonalities and differences and engage with each others’ cultures. It also became really clear that the technicalities of filmmaking would not be the best format for this group, so instead, we used the filmic principle of ‘framing’ to create a series of wearable ‘TV head dresses’ that participants designed to communicate their celebrations. Working with carnival costume designer Mia Harris, we created a series of costumes that combined storytelling, framing and designing, which were then worn as part of a procession on the carnival sharing day.

I also worked with another group with the puppeteer Polly Beestone, to create a series of kites that were inspired by portraiture photography and the identity of the group. We created shadow portraits of each participants, then used photographic collage, marbling, sewing and digital layering to create our kites.

What I really learnt from this project was that my roots in film practice feed through all my work, even if the end result doesn’t end up being a film. The principles of framing, sound and visual storytelling run deep, and can be transferred to an outcome which best serves the group, even if it sometimes pushes me from my comfort zone. You need to trust in your creativity and ability to have an editorial eye rather than push your singular practice or vision. The work in turn becomes much more interesting.

This work teaches you to be adaptable, responsive and to drop your ‘preciousness’. You become a better collaborator for it. Within all the challenges, successes and learnings it is also, most importantly, really really fun.
I never set out to do this job, I didn’t even know it existed until I fell in to it, but now, I couldn’t imagine doing anything else. It is colourful, playful, emotional, collaborative, enlightening and deeply rewarding for all involved.

These links take you to a selection of Chuck’s work with Magic Me:
Decorum London video
Decorum Southend video
Moving Moments video
Inside Out video
Stepney Stories video