Every Wednesday a group of seventeen Year 3 students from George Mitchell Primary School have met with adults from Glebelands, a sheltered housing group in Leyton to explore ways in which different generations can come together to make, imagine and celebrate.

Every Wednesday a group of seventeen Year 3 students from George Mitchell Primary School have met with adults from Glebelands, a sheltered housing group in Leyton to explore ways in which different generations can come together to make, imagine and celebrate.

Since January the group have worked together combining painting, textiles, printing, shadow puppetry and photography, to create dragons, kites and puppets.

“Our puppets, kites and dragons have been both a means for exploring who we are as a group and finding out what we can make together that is unique to us. The wild and wonderful characters are a reflection of the eclectic mix of fun, exploration, and sharing that has made up our sessions.” 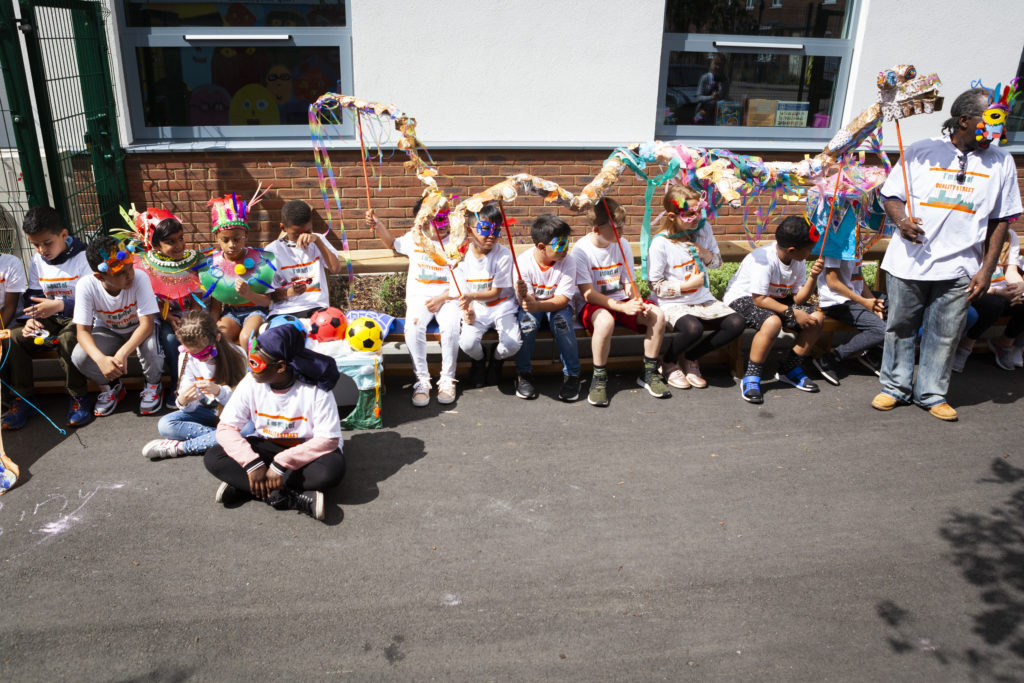 Our two dragons were made by Hazel class in the very first ever Quality Street workshop. The class worked together to make the dragons using just tape, a piece of string and newspapers. The dragons were designed, made and brought to life in just 20 minutes, making sure everyone’s ideas on how the dragon should look were included.

Since that session the group have added to the dragons week by week, they have been strengthened, decorated and bathed in glitter!

Ben Riley (our longest dragon) is a reflection dragon. Each of the students designed and printed a dragon’s scale and after each session they filled it with a description of what they had done, how they felt, who they met or what they had learnt.

All of the materials that decorate the dragons are pieces of art work that the group created, our dragons are a visual calendar of our project and its journey. 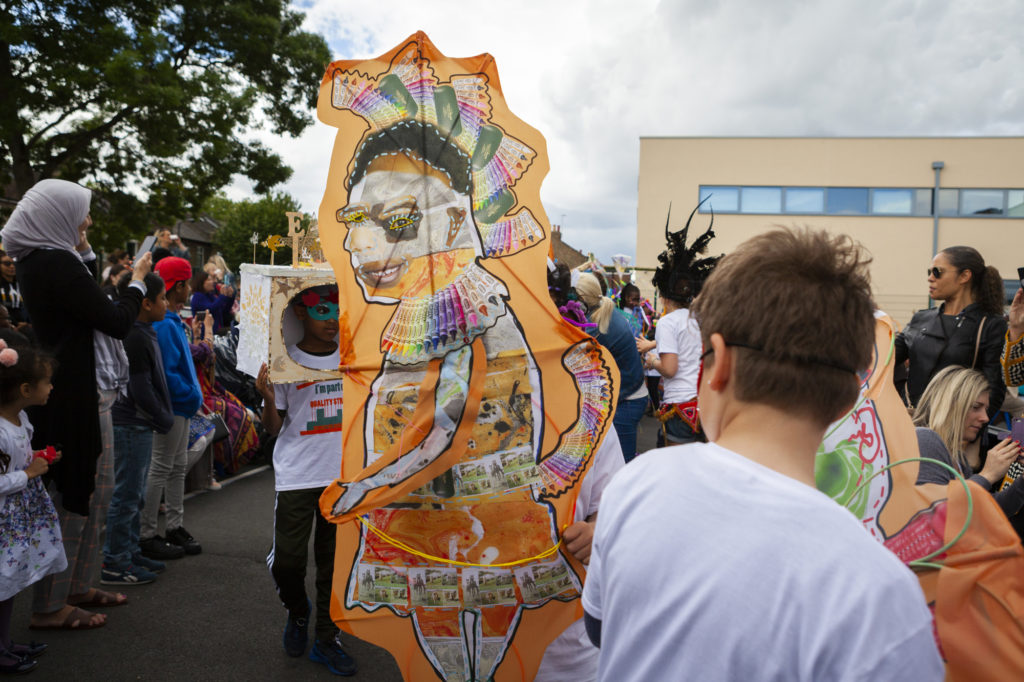 Our kites were the first pieces of work that we made together intergenerationally, we used them to discover what it was like to work together, to get to know each other and to test out some of the processes and aesthetics that we would use to create the puppets.

In the first intergenerational session, the group made hand shadow pictures on tracing paper and captured their shadows on the paper using maker pens and wax crayons.

The group worked in teams to fold the tracing paper into kite shapes using an origami technique, then using a shadow screen, Chuck captured shadow portraits of the group.

We printed out miniature versions of these portraits and the group worked in pairs to add bodies. We then imagined that the mini portraits were explorers ready to go on a mission and each person needed a role. Together we decided who would be the carer, the entertainer, the problem solver, the spokesperson. Using pictures of objects to represent each role, the group adorned their portraits.

Each group placed their mini portraits onto their kites and flew them off on an adventure. 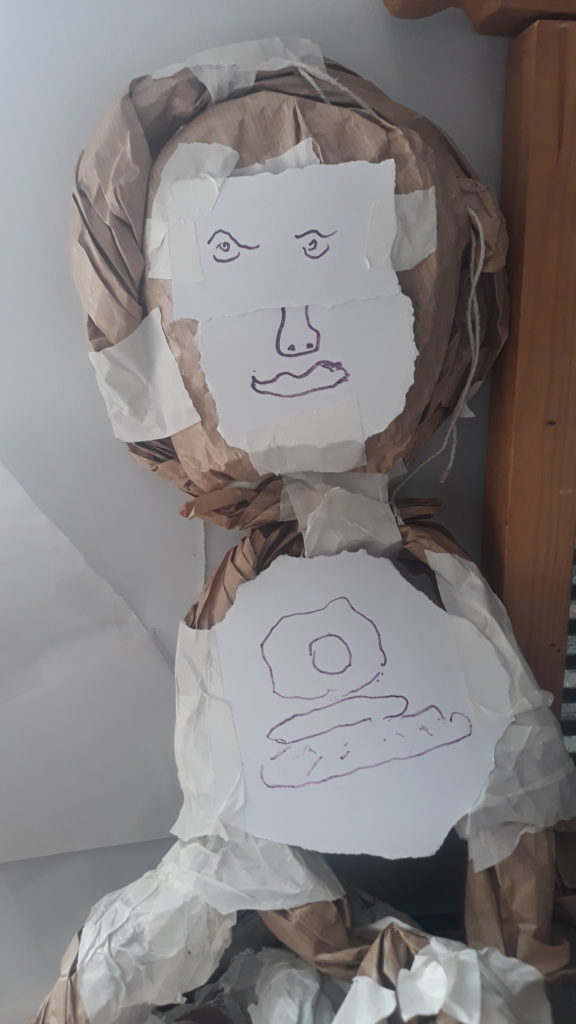 The puppets were created throughout our intergenerational sessions, adding a new layer to the design each week.

Using the shadow portraits as a head, the group played ‘consequences’ to create the body of the puppet. Each person drew a section of body and then folded the paper over. The end result was a surprising and funny mix of characters!

Working in teams of four the group experimented with Japanese marbling. They took it in turns to drop ink and then soap into a tray of water, creating consecutive rings. As they talked and gently blew onto the water, the patterns moved and swirled creating beautiful designs. They captured the designs using paper. 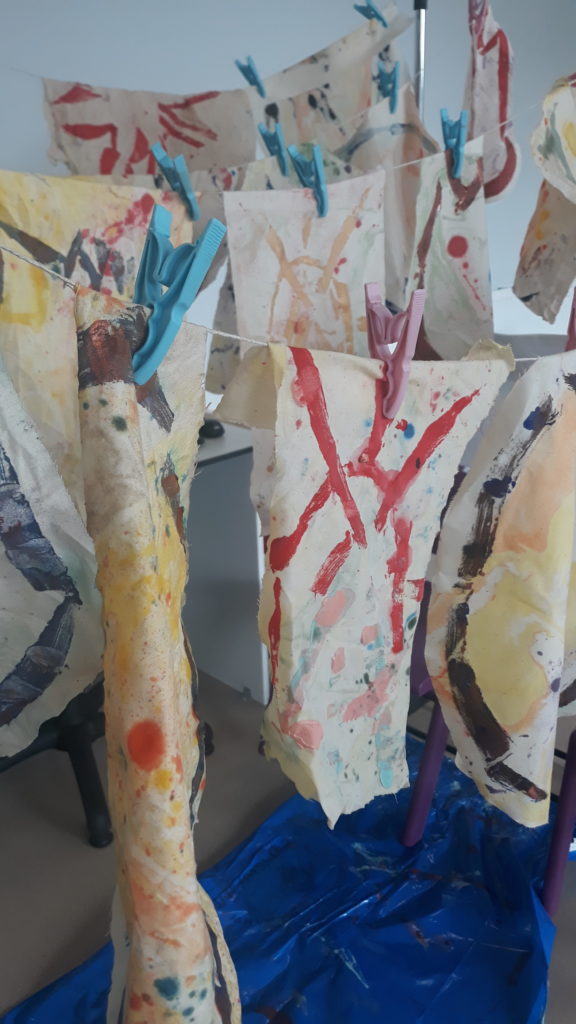 Tearing the papers into strips, the teams stuck the marbled paper behind their portraits, making crazy coloured characters.

Chuck took beautiful photographic portraits of each member of our group.

We printed out the portraits. Working in their teams, the groups tore facial features from the portraits and collaged them together creating wild and wonderful new faces for their characters. Each character is a mixture of lots of people in the group!

We also printed out some eyes and noses really big. The group worked in teams of four to embroider onto the photos using coloured thread. Two people sat on each side of a screen with the picture on it. They teams passed the needle and thread from one side to the other, taking turns to pull the thread and to push the needle back through.

We asked the group to bring in objects that meant something to them or told us something about them. They shared the objects and their stories. This included a wide variety of things, from Daniel’s famous fork to Mary’s wonderful homemade food. The group also shared their hobbies and we found objects to represent them. We discovered that Kevin loves boxing and that Joe used to be a boxer. We found out that Lloyd has been a teacher and a chef and that Aleeza loves to lay on the sofa, sleeping and eating crisps. Chuck took photographs of all of our objects.

We printed out small versions of the objects and the group created the final layer of the puppet designs, using the objects to adorn their characters with wild headdresses and costumes. Chuck brought the layers together digitally and we printed the designs on to fabric.

Polly and a group of volunteers then made up the puppets ready for parading and celebrating! 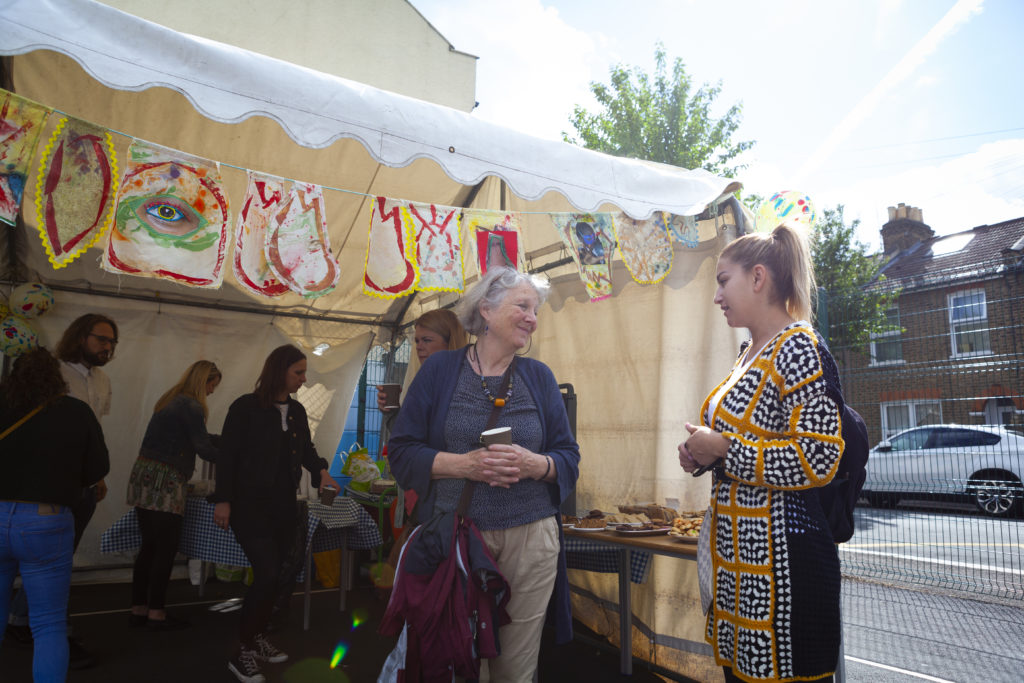 In order to include more students in the project and share our learning, Magic Me ran workshops with the whole of Year 3, 4 and 5 as well as adults from Glebelands and Albany Court. It was during these wider sessions that the bunting was created.

Children from Rowan class designed block prints and printed large shapes on to fabric, they then experimented with mixing colours and patterns.

Children from Hazel class and adults from the Wednesday project used Japanese marbling to create the unique designs that decorate the shapes.

Photographs and art work from all the projects were then sewn onto the bunting.

Photos on this page by Chuck Blue Lowry and Samia Meah